For a successful app development the basic three cost of development is must; time, cost, and quality. But like you can’t be on two boats together here you cannot improve one without harming others. The good news is, React Native is your solution. React Native provides cross-platform mobile apps. It uses native components at a lower cost and with higher quality than traditional development methods.

Here are the key tips that bring your apps to market faster with React Native:

Every developer knows how difficult it is to maintain both iOS and Android apps because of different languages and frameworks. React native is a single platform to develop cross-platform apps and offers you a consistent user experience across multiple platforms. Hire dedicated react native mobile developers who are comfortable with native UI libraries, APIs, etc.

Before, you have to go through the traditional process of app modification. Now, with help of Code Push, React Native and Apache Cordova use the App Center cloud service that automatically updates the apps during run time, and the user can see the changes without re-launching the app.

Work with a tight budget

React Native app development services not only saves time by working on cross-platform apps, it saves the cost as well. As a beginner or SME, you need to maximize the ROI on every penny spent. Instead of hiring individual iOS developers and Android developers, you can invest in hiring a good react developer. 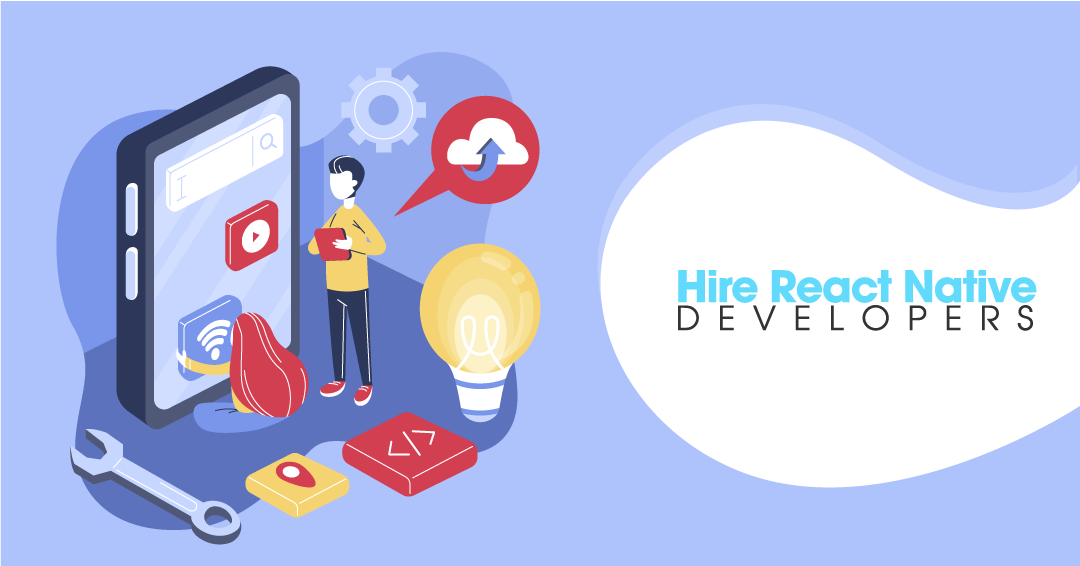 React native provides easy to read code that makes the complex task simple. The Facebook UI library is used by this framework to create code that is simple to understand. However, every project has different outputs but react-native provides a simple and straightforward solution to a variety of these problems.

React Native has a prominent feature Hot Reload that helps app developers to get a live preview of the code and its actual impact. It also makes sure that the developer commits the least amount of errors, and makes the code “bug-free”.

Lots of ready-made solutions and libraries

One of the major benefits of react native is; several ready-made solutions and libraries to ease development activities. It provides you with testing libraries such as Chai, Mocha, and Enzyme that help you to write bug-free code.

Expo is a free and open-source tool-chain that monitors the progress of your app and tests new features. You can catch the errors easily with the Linting process and ES-Lint is a great tool to accomplish this task in React Native.

Apart from that Type Checking can also be done faster now because of Flow and Prototype. For prominent state management, Redux is the best react native library. This helps you to move heavy computation towards the server and build cloud-native apps.

Facebook is promoting React Native on a bigger platform, by constantly updating the framework with new features and new ways to solve your issues. React Native has a strong developer community online. In today’s technology exploring market along with cross-platform compatibility, react native is being adopted by more and more developers, globally.

In React Native’s GitHub repository, nearly 2000 developers have committed more than 16000 times in 72 branches, with a whopping 300 and above releases. Facebook itself uses 750+ screens made in React Native in their apps

Plus, React Native is already adopted by giant brands and companies in the tech industry such as Skype, Uber, Tesla, Walmart, Pinterest, and Bloomberg, and it doesn’t look like it is slowing down. 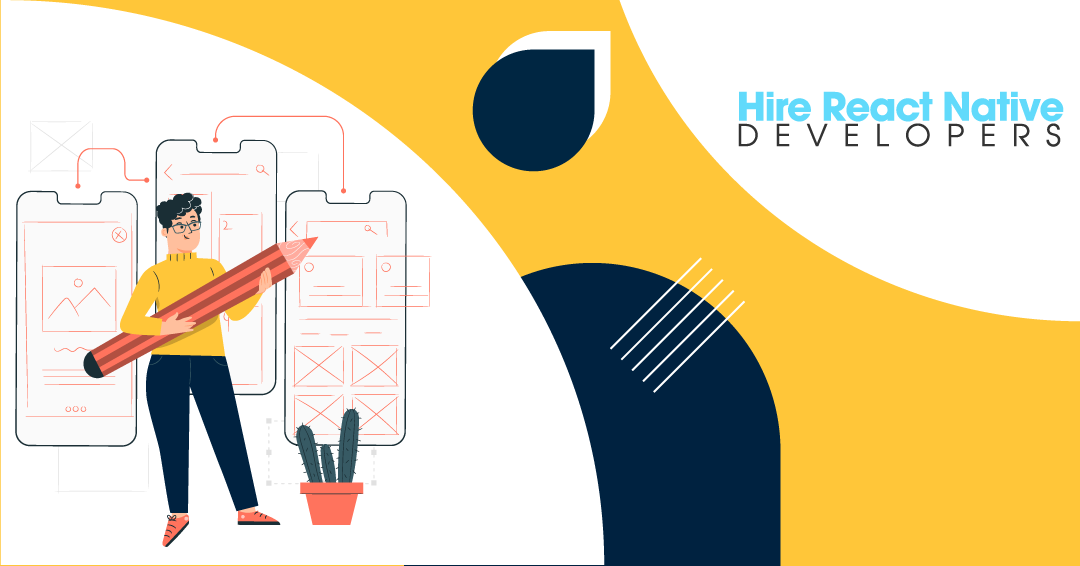 React Native is the best solution because it was built with the ability to segregate Native code, framework code, and styling that helps react native developers to create different styles from the server-side.

Here, app developers can easily deliver a personalized user experience to each user on the same application that also helps in digital transformation.

React Native provides several reusable libraries available online, and it is increasing day by day as big and popular giants start supporting it. It allows you to re-use some of the existing components and this is how third-party plugins come in.

It helps you to eliminate the need to use specific Web View functions. React Native framework connects the plugin with a native module, it helps your app in faster loading and smoother running, along with better memory management. So, be wise, search the required plugin, and use it to enhance the app’s performance.

React Native allows developers to imitate the look and feel of the UI Very close to JavaScript and less like a framework. This helps to make the development process easier and enables the UI to give fast responses. It also seamlessly integrates with the existing code as it is compatible with native software. Hence, it helps developers to build complex apps using simple code.

Are you planning to develop a cross-platform app for your business? I must say react native is one of the best choices of frameworks that enables you to build prominent native app UI. So, there you have it. Hire React Native Developers provide you the great and prominent React Native App Development Services for your business and give you a reason why your next app should be built using React Native.

6 mn read Focus on Your Inner Peace Spending time outside is the best method for you to relax and find your inner peace. Outdoor activities help people feel peaceful and close to nature. A walk through the woods or in the park will reduce stress and anxieties. Just spending time outside can give us immediate inner calm. […]

END_OF_DOCUMENT_TOKEN_TO_BE_REPLACED

5 mn read (function(i,m,p,a,c,t){c.ire_o=p;c[p]=c[p]||function(){(c[p].a=c[p].a||[]).push(arguments)};t=a.createElement(m);var z=a.getElementsByTagName(m)[0];t.async=1;t.src=i;z.parentNode.insertBefore(t,z)})(‘https://utt.impactcdn.com/P-A3454212-2126-4b58-955f- How to Boost My Motivation If you’re having difficulty boosting your motivation levels then it’s time to get imaginative! These ideas might help by getting outside, reading motivational quotes, and working out. Positive self-talk could be your best option to boost your motivation. Continue reading to learn how to apply these tips to […]

END_OF_DOCUMENT_TOKEN_TO_BE_REPLACED

5 mn read Marketing trends come and go, sometimes as fast as the wind. It’s just not easy to capture the right flight pattern. Should your business jump on the TikTok bandwagon? Virtual reality (VR) may not be on the rise, but can augmented reality (AR) be trusted? What exactly is going on with bots and artificial intelligence […]

END_OF_DOCUMENT_TOKEN_TO_BE_REPLACED

4 mn read Introduction:    Data cleaning is one of the most crucial aspects of data science and machine learning. It is crucial in the construction of a model. It isn’t the most glamorous aspect of machine learning, but there aren’t any hidden tricks or secrets to discover. However, proper data cleaning determines whether a project succeeds or […]

END_OF_DOCUMENT_TOKEN_TO_BE_REPLACED

4 mn read Scope and demand of Full Stack Developers in India   Choosing a career in the technology industry can be difficult. People don’t want to settle for something outdated. They want to find career opportunities that are in demand and those that remain the same for years to come. With so many options available, trying to […]

END_OF_DOCUMENT_TOKEN_TO_BE_REPLACED

4 mn read Eucalyptus oil is one such flexible oil that is utilized to upgrade the magnificence of skin and works on the surface of hair generally. We as a whole tend to utilize regular items on the skin and follow a day to day skincare system. In any case, we frequently neglect to deal with our hair. […]

END_OF_DOCUMENT_TOKEN_TO_BE_REPLACED

Tell him time is of the essence. I have a dark side, too.
Culture